It Takes a Volunteer Village

Beaver Creek Farm Sanctuary relies on the dedicated help of volunteers. We are currently under construction and will be accepting new volunteers in the Spring 2016.

We are always looking for foster homes. Please fill out a volunteer application with special detail to the Foster Home section please. We will be checking your references.

We have Team Pawds that get things done – pick one or two to join and reap the rewards of good deeds done!

Work with the animals, clean stalls, scrub out water buckets, bath horses and dogs. Socialize dogs and cats. Spend time grooming the horses. Do a little manual labour. Dirty jobs await! The water trough can use a good scrubbing. The pig shelter needs to be cleaned as well as the duck shelter. Litter boxes emptied, dog poop picked up and general odd jobs. We also need people able to do transports. Dogs to and from the vet or groomers. Transport dogs to go to different foster homes – speaking of which, we can always use more foster homes. Volunteers are important at events for fundraising, representation and assistance. We are always looking for building help – we need a new leanto and would love some expertise in getting the most from the facilities we have now. There is a never ending list of work waiting at the farm.  Fencing fixed, lines walked and puppies to cuddle.

ADOPTED! Arrived June 14, 2014: Oliver. Akita Rottie  mixed breed dog from the south who was rescued with just 16 minutes to spare before being destroyed due to over population at the shelter where he ended up. Oliver is a sweet boy with a fun loving personality. He’s a thinker and a lover. Likes other dogs and cats. We believe Oliver was approximately 12 weeks old when he came to us; now he is a big goofy dog! Oliver has been adopted! June 21, 2014

Adopted! Ruby – a tri-colour chihuahau has been adopted and went to her forever home June 14, 2014! We are so happy for the new family. Adopted! Cookie – We have had many dogs that have come to BCFS to heal and our first ever rescue dog is no exception. Cookie was found wandering the cold streets of Toronto matted, infected and horribly alone. She was found by a stranger who couldn’t help so she turned Cookie into the local shelter. The local shelter found Cookie to be unadoptable due to her medical condition, so they contacted BCFS in hopes that we would be able to rehabilitate her in a home environment. 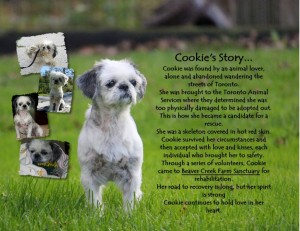 … and we did. Cookie is now living in her forever home with her big brother Blue (who also happens to be a shih tzu) and loving family. It took months of nursing until Cookie was finally ready for her forever home and the transition was a difficult one for both of us.

Ling Ling – Adopted! Next came a powerhouse in a six pound curly apricot body. Ling Ling was a small toy poodle full of love and fun, but not living in the right environment. She was surrendered after being kicked by one of the young children. She came a little afraid, but more than willing to move forward to a forever home. After her spay and badly needed dental Ling Ling found a wonderful forever home where she visits the local nursing homes as a therapy dog. A very happy tail!

Saving the world one animal at a time…